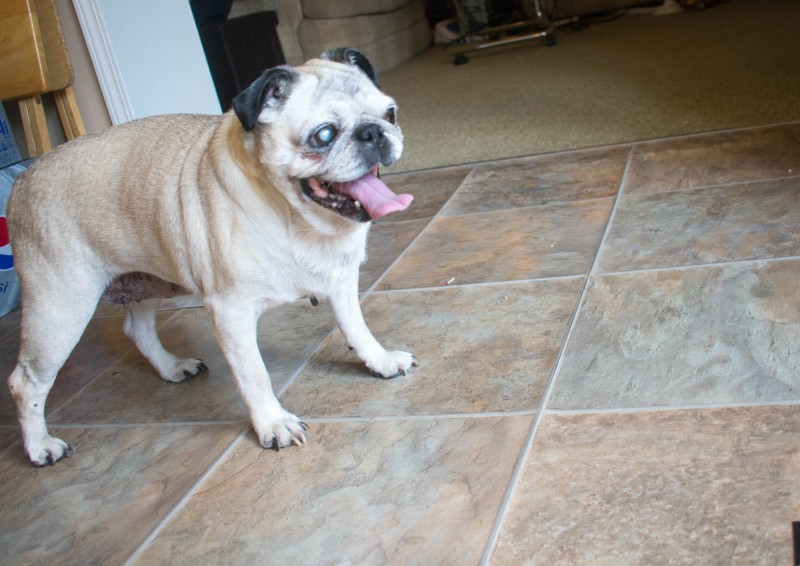 We brought Frank & Beans, my two pugs, home when they were already 8 and 9 years old. That was almost 7 years ago! About 2.5 more months and it will be 7 years. So they are, or soon will be, 15 and 16. That’s something like 90 to 100 years old for pugs. They both have declining health in different areas, but we’ve been quite lucky that they have both been able to stay with us this long. Something we’ve been dealing with for over a year now is our female pug going blind. I thought I’d share what the experience has been like for those of you who may be starting to face this now or who will in the future. 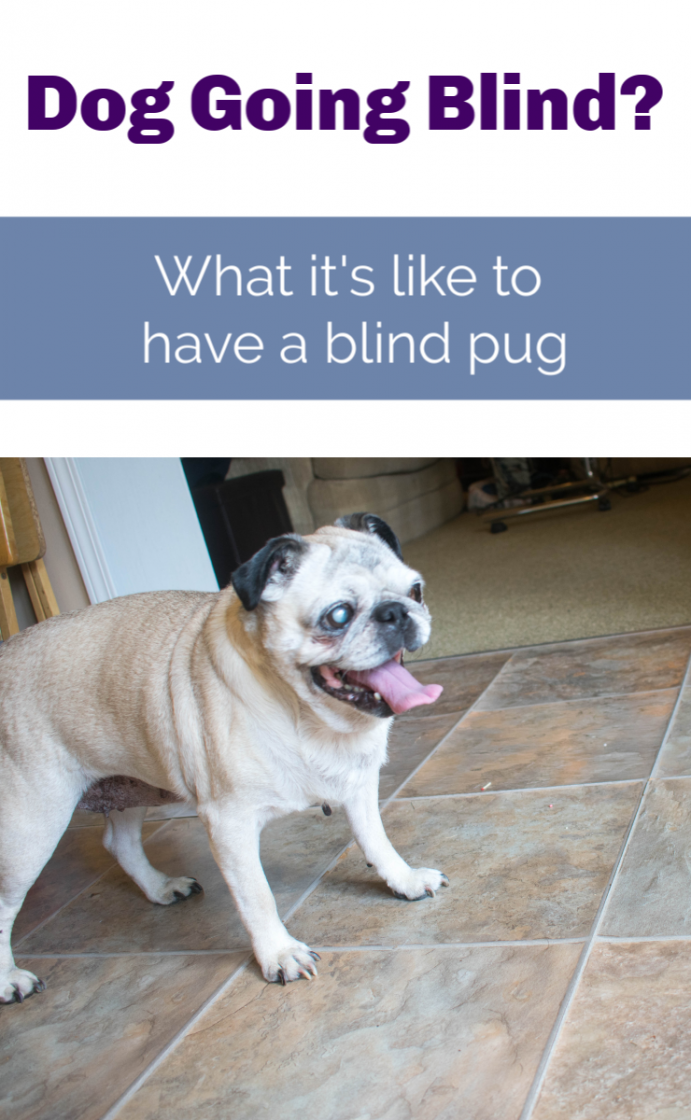 I honestly don’t know when our pug started going blind, but I believe her declining vision probably started before we even brought her home. When I go back through photos I can tell she had a glassy-type look in one of her eyes from the first time we met her. It was a lot more subtle than it is now so we weren’t aware of it really. There was nothing about her behavior that suggested she struggled to see. It was about two years ago that we noticed she would run into things if we moved furniture or left something in the floor but it was only on rare occasions, perhaps a couple of times per year. So even at that point, we thought she had declining vision but we had assumed that she still saw fairly well just because she navigated the world without an issue so much of the time. We did notice that the glassiness or white “glow” in her eyes had become more obvious. 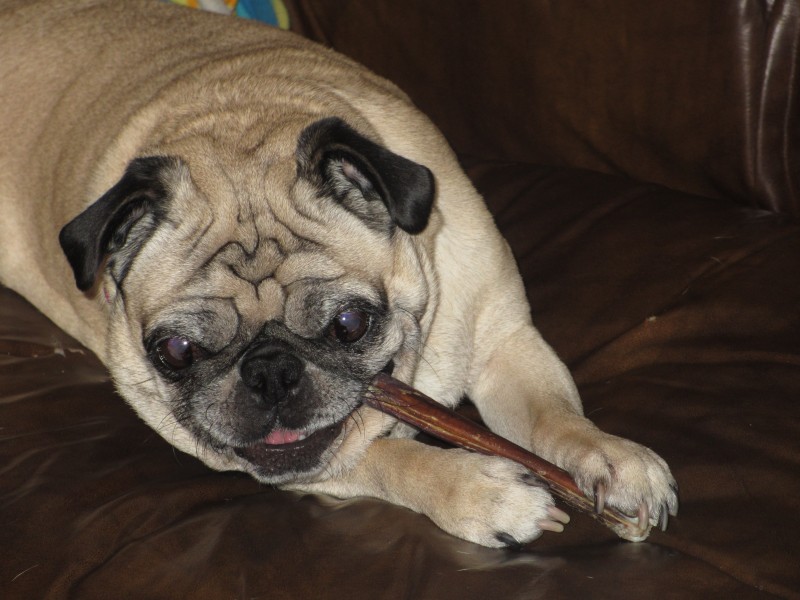 This is beans in 2014. You can see a bit of “glassiness” already, when the light was right.

However, about a year ago when we were in at the vet she asked us how well we thought Beans was seeing. We explained that we knew she had lost some of her vision but it rarely was an issue with her functioning, so we thought she was still seeing fairly well. She asked if it was okay to do a quick test to get a rough idea of her vision. We said sure. She flattened her hand and moved it towards Beans’ eye. Almost as if she were pretending she was going to hit her, except she moved slowly. Our dog never reacted. So she tried again, this time moving faster more like a true ‘fake slap’ and again, no reaction. She also tried making a flicking type movement with two fingers really close to her eye to see if she would flinch or move, and she didn’t react! On the other eye, she did flinch a bit when the fingers were flicked close to her, but had not flinched when the vet did the “pretend smack” motion.  So clearly, she wasn’t seeing as much as we thought if she had no reaction to a hand being raised towards her head like that! 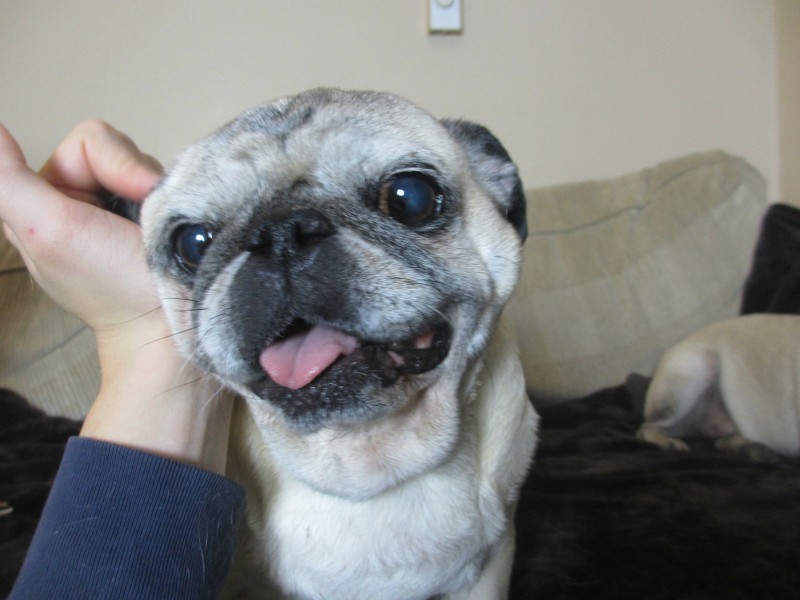 Ryan and I were both surprised that she reacted so little! The vet said she estimated that she was about 90% blind. With that being a year ago, her vision may have declined even further since then.

Overall, she still functions really well. We had to move last July (about 3 months after we were told she was about 90% blind) and we worried that she would struggle a lot more once we moved to a new place. She did run into the wall in our hallway a few times when we first moved. I think she particularly struggles to see things that are the color white, and the hallway wall is white which is why I think she didn’t see it. She’s never struggled with running into major furniture like couches or tables. She has run into a fan that we sometimes leave on the floor, but the fan is white. We’ve also noticed that she struggles with getting anxious in low lighting if there is one light source. For example, in our living room if we have one lamp on and someone walks in front of the lamp or raises an arm up that casts a shadow from the lamp, she might snap at the air (almost like she’s trying to catch a fly?) in the direction where the shadow is at. It doesn’t seem to be a problem when we have overhead lighting or just good lighting because then there aren’t dark shadows. We’ve never had her bite me or Ryan but she has bit our other dog, Frank before when he was nearby and she snapped at a shadow. As a result of this, we are cautious to keep her away from children just in case. 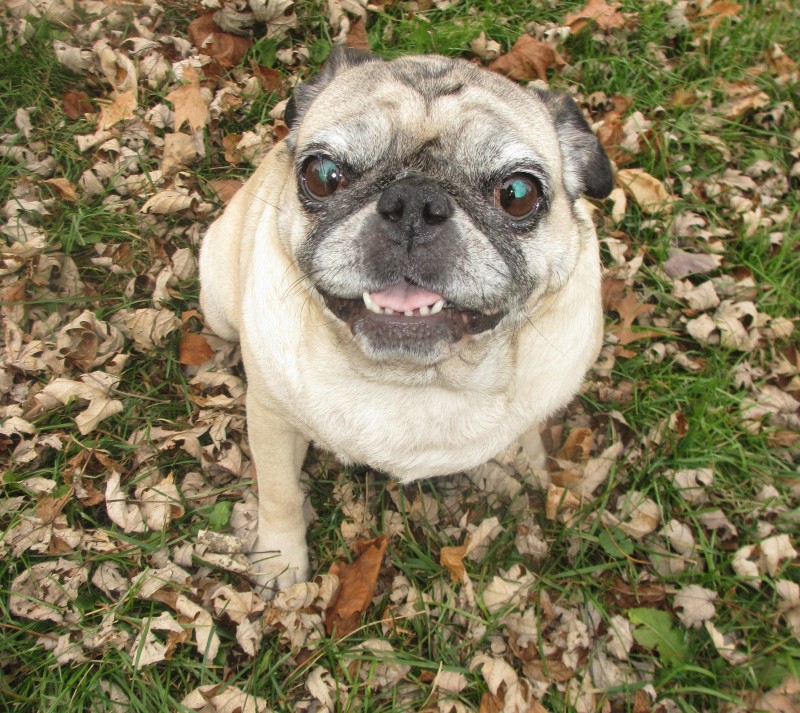 We’ve also noticed that she was hesitant for many months to walk on our laminate flooring in the kitchen which is a very dark blue – almost black. I think it may have been so dark that she may have thought it was a hole or something? For many months after we moved she would stay at the edge of the carpet and never put a foot on the laminate area. However, one day she very cautiously placed one paw on the floor and slowly took a step and then walked right across the floor. Every day since then she’s been able to walk on it without an issue. She just had to realize it was safe first and it took her a while to decide to test it.

I also notice that she pants more and seems more nervous if we take her to new places and I think that is probably a result of not being able to see her surroundings very well. She’s also more nervous around dogs, especially puppies or high energy dogs who move quickly, than she used to be. Though I think that makes sense, it would be intimidating to be aware that there is a fast-moving creature in your general vicinity but not be able to see it very well!

She’s always been a “velcro dog” who like to stay very close to me. Now if I’m sitting on the couch or the bed or something, she won’t be able to see me and will keep pacing the house looking for me. So I’ve learned to reach a hand out towards the floor when she walks by the couch so that she will catch my scent and then will know where I am and will settle and lay on the floor near me instead of pacing the house for me.

She used to like to wander in yards and would always come back towards our door with no issue. We’ve always lived in the country or in places with large yards, so we were able to let her wander a ways before calling her back near us. Now, we don’t risk letting her get more than maybe 10 feet away from us even though we have a very large yard that is a long distance from the road or other houses, because she will start to just randomly turn around and stare in different directions where it seems she’s lost track of where she’s at, and I don’t’ feel confident that she’d know which way to walk if she decided she wanted to come back towards the house or towards where I’m standing. We keep a closer eye on her in general. 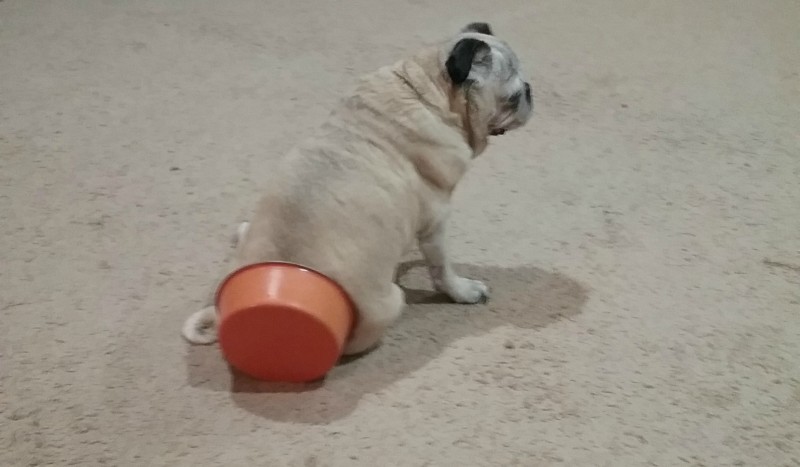 Overall, she’s adapted to her vision loss in a way that is easily manageable to us. However, dogs with different personalities or temperaments may struggle more than Beans did. I know some dogs become terribly anxious after they lose their vision where they growl or bite at anything that moves, where it becomes unsafe for anyone to come near them. We feel lucky that her fear and “aggressive” type behaviors like snapping at shadows has been fairly limited and manageable for us.

If you notice that your dog is losing their vision, it’s a great idea to see your vet. As far as trying to figure out if you can adapt to their needs as your pug goes blind, I’d recommend just waiting to see how they do. Some dogs tolerate it fairly well while others may struggle. The only way to know for sure is to wait and see how your dog reacts.